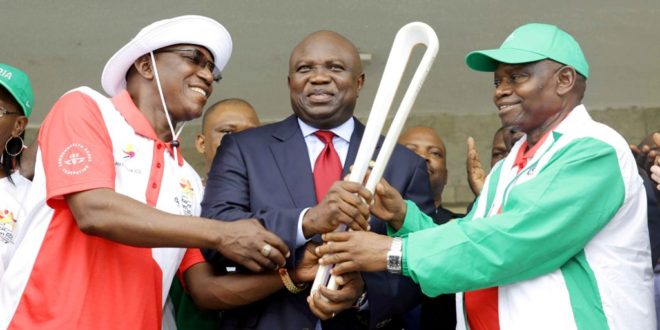 Lagos State Governor, Mr Akinwunmi Ambode on Monday said adequate preparation remained the only panacea for Nigerian athletes to perform exceptionally well at the Commonwealth Games taking place in Australia in 2018, assuring that every effort would be geared towards giving them necessary facilities to prepare.

Speaking at Lagos House in Ikeja after receiving the Queen’s Baton, the traditional curtain-raiser to the Commonwealth Games, Governor Ambode assured that the State Government would revamp all the sporting facilities in the State and make them available for use by athletes representing Nigeria at the Games.

The Governor, who was particularly happy to receive the baton at Lagos House, congratulated the people of Australia for being the proud host of the Commonwealth Games, adding that the development was a wake-up call to Nigerians.

“I like to assure that we will use this particular event to jump-start and reactivate the training of all our athletes that will be going to the Commonwealth Games next year. While I like to charge our athletes, I also like to appeal to the different agencies and authorities that we should ensure that we provide adequate facilities and equipment for all our athletes.

“Like you are already aware, this Commonwealth Games will be hosted in the beautiful city of Gold Coast, Queens Land in Australia and so we believe strongly that proper preparation is the only way that can get Nigeria to win the gold and that is why our government is seriously committed to uplifting all the sporting facilities in the State so that we can use it as a platform to encourage our athletes and also improve on sports development.

“In the last few weeks, we have been trying our best to reactivate the sporting facilities we have in Lagos and in partnership with the Federal Ministry of Sports, we believe that those facilities will be available for all our athletes to use them as we prepare for the Commonwealth Games,” Governor Ambode said.

On his part, Minister for Youth and Sports, Solomon Dalung, who led the delegation to the Lagos House alongside President of Nigeria Olympic Committee, Engr Habu Gumel and Australian High Commissioner to Nigeria, Mr. Paul Lehmann, among others, thanked the Lagos State Government for the reception and other plans at ensuring the best of preparation towards the coming games next year.

The Minister specifically promised collaboration of the Federal Government with any State that is ready to assist in facilitating better sporting activities in their States for the benefit of the country.

“Just as the Governor of Lagos State had indicated, we would continue to collaborate with States that are willing to invest in the transformation of our dilapidated facilities in their States, so that it can be put to use for the benefit of Nigerians.

“The state at which some of the facilities are benefits nobody but if they are transformed, they would be more useful to Nigerians and the young people,” Dalung said.