Lagos has concluded all arrangements for the hosting of the 6th edition of the only women marathon in Sub Saharan Africa, tagged: “Lagos Women Run”, which is scheduled to hold on Saturday, November 13th, 2021.

The Chairman, Lagos State Sports Commission (LSSC), Mr. Olusola Aiyepeku, disclosed this at a Press Conference held on Thursday at the Teslim Balogun Stadium, Surulere, noting that a core agenda of Governor Babajide Olusola Sanwo-Olu’s administration is the inclusion of women in every sector.

Aiyepeku stated that 3,850 women have registered for the forthcoming women marathon, expressing gratitude to the Coordinator of the event, Mrs. Tayo Popoola, for coming up with the idea as part of efforts to enhance the inclusion of women in all sectors, just as he declared that the event has attracted many sponsors and witnessed growth since inception a few years ago.

His words: “The number of sponsors has grown from what we had in the previous editions. I hope to continue to see this type of growth not only in sponsors but also in more investment to grow the capacity, utility and strength of the race, I want to see the event on the global map so that Lagos Women Run will be a calendar event in international circuits and globally”.

The General Coordinator of Lagos Women Run, Mrs. Tayo Popoola, stated that the 2021 Marathon has a unique twist to it, explaining that contrary to the norm whereby the commencement point is on the island down to the mainland, the Y2021 annual race would take off from the Mainland at the National Stadium to end at the Mobolaji Johnson Arena, Onikan.

She averred that the new plan would allow the organisers to showcase the aquatic splendour of Lagos State along with its historical aesthetics and monuments to the world during the race, pointing out that reputable individuals, especially women from diverse works of life, have shown interest and are willing to identify with the Lagos Women Run marathon.

Mrs. Popoola also noted that COVID-19 safety protocols will be strictly observed before and during the race, asserting that participants from other countries would have to undergo a mandatory COVID-19 test before participating.

“We will ensure that women who have come in from other countries perform all COVID -19 protocols, including running a test to ensure their safety and that of every other person.  They will be quarantined before participating in the race. To also ensure safety procedures, these women’s interactions with others will be reduced to the barest minimum”, she stated.

The Assistant Controller, Lagos State Traffic Management Authority (LASTMA), Lagos Central, Mr. Akinpelu Ayuba, spoke on the itinerary of the runners and assured that due diligence has been put in place to prevent the inconvenience of other road users during the marathon. 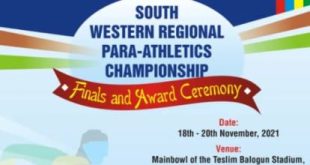