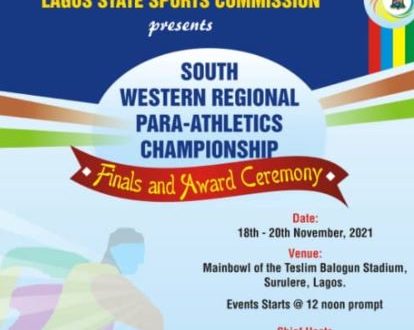 The Lagos State Para-Athletics Association is set to host the Regional Para- Athletics Competition for the Southwest Zone as part of the efforts to stimulate the growth of Sports in Lagos.

A release issued by the Chairman, Lagos State Para-Athletics Association, Mr. Rafiu Olawale Etti, said the forthcoming games is part of the strategic mandate of the Lagos State Sports Commission for the development of grassroots sports.

He pointed out that the competition is aimed at rekindling the hope of the less privileged through sports and creating an enabling environment for the Athletes to showcase their talents in order to monitor performance progression, as well as to use sports as a veritable tool to sustain a positive environment, while continually engaging the Athletes to rechannel productive energy into positive ventures.

Etti explained that no fewer than 100 Participants from the Southwest zone will participate in the two-day event scheduled to hold at the Mainbowl of the Teslim Balogun Stadium, Surulere, from Thursday, 18th  to Saturday, 20th, November, 2021.