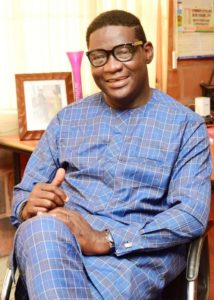 Oluwatoyin Gafaar ’Bolowotan’, Director General of the Lagos State Sports Commission is a sports administrator, financial expert and brand enthusiast. A graduate of the prestigious Ahmadu Bello University where he studied Economics, Toyin Gafaar also holds a diploma in Business Administration.
The LSSC DG who was born in Lagos Island on February 7, 1968, hails from Ikorodu, Lagos state.
Toyin Gafaar Bolowotan has worked for top blue chip firms but was until his appointment by His Excellency, Governor Babajide Sanwo-Olu the Head of Administration and Accounts at Prime Signs Limited. He is also the founder/chairman of Bolowotan Football Club and the proprietor and principal host of the Bolowotan Gold Cup (Ikorodu World Cup).
Toyin Gafaar has sat on the board of the Lagos State Football Association. He is married with children.
Share
Previous – Deputy Director, Administration & Human Resources.
Next Mr Sola Aiyepeku – Executive Chairman